Nicotine test kit can determine whether a recent tabacco use in an individual. This include the use of tobacco, pipe tobacco, cigars, cigarettes, and smokeless tobacco. It’s very simple to test and easy to diy (do it yourself) and accurate.

Our tobacco test kit is a urine test that detects cotinine, which is produced when nicotine enters the body. Urine sample is collected, easy to read dip strip is use to measure nicotine levels. It takes only 5 minutes to determine whether nicotine test is negative or positive.

Cutoff level of 200 ng/ml will detect the presence of nicotine up to 2-4 days after use (possible longer, depending on the frequency of tobacco used.)

How Long Does Nicotine Stays In Your System?

When a person smoke, nicotine is processed in your body and it will subside overtime. It’s estimated that about 80% of the nicotine that you inhale will be converted to cotinine in the liver. In your lungs, nicotine is metabolized into cotinine and nicotine oxide. These cotinine and others metabolites will then be excreted in the urine.

Therefore, cotinine is a reliable indicator of nicotine usage and a biomarker for tobacco used. That’s why nicotine test is also known as cotinine test, because the test test for presence of cotinine in the urine.

The length of time nicotine stays in your body will depend on 3 factors: amount you smoke, numbers of years smoked, and type of nicotine test is performed.

If it’s a urine nicotine test, you should be cleaned within 2-4 days of your last smoke. For heavy smokers, it will takes 1 week possibly longer for nicotine to leave your urine or remain undetectable level. Cotinine may take longer to be released from the body if you smoke menthol cigarettes, so that is another thing to keep in mind.

Cotinine is detectable in blood for at least several days after exposure to tobacco smoke. Depending on how much you smoke, the level of cotinine in your blood will reflect a nonsmoker level in 7 to 10 days.

The nicotine test that offers the longest detection window is a hair follicle nicotine test. These are rarely administered due to their expense, but they do exist. Nicotine can be detected for months after smoking cessation in the hair. Nicotine makes it to the hair the way all other drugs do, by its presence in the blood that nourishes the hair follicle.

While there are methods that you can use to clear your system of nicotine for a while, the ill effects of nicotine should be understood. There is nothing better than kicking the habit that can bring harm to you and your loved ones.

Can Electronic Cigarettes show up on a Nicotine Test?

Yes. The nicotine test is not testing for tobacco use, but instead for cotinine, a nicotine metabolite. E-Cigarettes produce an aerosol that contains nicotine and other tobacco-related compounds. While e-cigarettes may deliver less nicotine than traditional cigarettes, they can still show up on a Nicotine/Cotinine test.

Businesses – More employers are testing their prospective or current employees for nicotine than ever. Life insurance companies continue to test for nicotine, through urine or blood-based testing, in order to determine premiums and detect fraud. Our nicotine test is a very standard urine test that is used by employers all over the country.

Test Yourself! – There are plenty of people who use nicotine tests, by themselves or in conjunction with their family, to gauge their progress in quitting and keep themselves honest. It’s simple and easy to buy one of our nicotine tests for yourself and keep yourself on the long and difficult path to being smoke-free.

Parents – Every day in the Asia, approximately 3,000 teens under the age of 18 begin using nicotine and 4.5 million teens are smokers. As anyone who has been a smoker knows, smoking is very hard to quit, and it doesn’t help that starting to smoke when you’re a teen makes it more likely that you’ll continue the habit than starting in your adult life. For parents these tests are a great way to keep your kid honest about their use, especially since second-hand smoke does not show up on these tests.

When should I do the test?

This test can be carried out at any time. To perform the test: 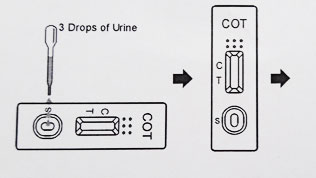 Note: The shade of color in the test line region (T) may vary, but it should be considered negative whenever there is even a faint colored line.